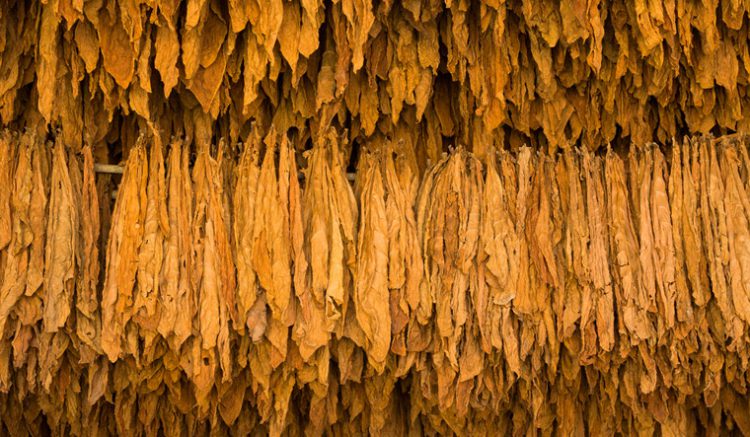 Tobacco, tobacco has always been associated with masculinity. Strongly aromatic, spicy, sweet, it is preferred by men primarily for the condition it gives, for the way it can be “enjoyed”. From the finest cigarettes, to the elegant or rebellious cigars, to the pipe or the hookah, tobacco has given birth to real passions over time. It seems that women find irresistible men who smell of tobacco, because they give them the feeling of men with a strong character, who know what they want. It is not about the breath that smells strongly of cigarettes in the case of heavy smokers and that does not make a man irresistible but rather repulsive, but it is a fine smell of quality tobacco impregnated discreetly in clothes and skin. That’s sexy and conquering.

Really wonderful tobacco themed scent – very rich smelling with a dry down that becomes comfortable and soothing to my nose as time goes by. A * Men Pure Havane by Mugler is an Oriental Vanilla fragrance for men. A * Men Pure Havane was launched in 2011. The nose behind this fragrance is Jacques Huclier. Top notes are tobacco and white honey; middle notes are vanilla, cocoa and patchouli; Base notes are amber, French laudanum and styrax. This scent drives my woman wild. It’s sweet, masculine, and perfect for Fall or Winter.
There are many flankers in the Thierry Mugler Angel Men line-up, however, of all the fragrances I own in the Mugler lineup (trust me, I own all the flankers) – Angel Men Pure Havane is my most favorite. One of the things that makes it so great is that it has the heart of A* Men, but does away with the overbearing tar notes and introduces a creamy and sweet opening.
The opening begins with a blast of cured tobacco, honey, and tonka bean. During the dry-down, the tongka bean and honey become more prominent which creates a masculine and delicious concoction of scents that is very pleasing to one’s senses.

This spicy scent, which represents Tom Ford’s passion for London, is reminiscent of the sophisticated, smoky atmosphere of English gentlemen’s clubs. Tobacco Vanille perfume is impregnated with a fragrant oriental note, which, in combination with the opulent essences of tobacco leaves, exudes a spicy and aromatic flavor. The middle note of the perfume reveals the creamy tones of tonka, tobacco flowers, vanilla and cocoa. The thrilling evolution of the perfume ends in an arrangement of dried fruits, intensified by the woody and sweet essences. The duet of top notes that opens the essence is strong, masculine, but also mystical, offering a sensual explosion for the olfactory senses. This duet is given by tobacco leaves and lots of oriental spices. The tobacco leaves offer masculinity and emphasize the first name of the perfume from the beginning, and the spices are feminine, spicy and exciting, offering an enigmatic wave over the dark tobacco leaves smell. These spicy tobacco leaves teleport the wearer to an enigmatic oriental atmosphere, suitable for both men and women. Middle notes are an erotic game between male and female notes. Thus, the bitter-sweet smell of tonka beans is highlighted by the dry smell of leather offered by tobacco flowers. All this bitter essence is beautified by the appearance of the aphrodisiac scent of vanilla powdered with cocoa. These strong contrasts highlighted in the middle notes do nothing but outline the idea of ​​unisex perfume. The base notes are a real feast for the olfactory senses, because the sweet and fragrant smell of candied fruits appears with a special warmth, but this does not last long because a hard and dry wood essence begins to take shape.

Black Walnut by Banana Republic is a Woody Aromatic fragrance for men. Black Walnut was launched in 2006. The nose behind this fragrance is Harry Fremont. Top note is Cognac; middle note is Tobacco; base note is Virginia Cedar. This perfume is the winner of award FiFi Award Fragrance Of The Year Men`s Private Label/Direct Sell 2007.The notes above made me curious how the fragrance would smell. Cognac, tobacco and cedar simply sounded too interesting not to dare a test. Fortunately, it was added that obviously the smell was adjusted.

Gabbana Intenso is pure instinct; the power of an emotion that is freely expressed. It is the force of a determined man, with a heart that is rooted in tradition, yet revels in the modern world. Dolce&Gabbana Intenso is a woody aromatic fragrance, whose profound appeal is defined by a brand new discovery in the olfactory world: the Moepel accord which has been re-created from the flowers and leaves of the Milkwood tree using Headspace technology. Dolce&Gabbana Intenso represents the new generation of Dolce and Gabbana men, whose heart is simultaneously rooted in tradition. In the same pattern, Intenso marks and celebrates its ties with Pour Homme by mirroring the iconic lines of its design. The classic flacon, elegant and understated with its curved silhouette and cylindrical cap, is refreshed with a dark tobacco brown lacquered glass.

Very nice cologne. Viktor & Rolf launched in 2015 a new essence for men, the V&R SpiceBomb Extreme perfume. This essence is characterized by the truly explosive composition, encapsulated in a bottle with a suggestive design, in the shape of a grenade ready to explode. Due to its intensity, the perfume is more suitable for cool autumn or spring nights. Both its longevity and persistence are quite strong. Spicebomb Extreme appears more spicy and intense than the original Spicebomb essence, on the skin of a man brave enough to wear in society. In the composition of the SpiceBomb Extreme perfume, the tobacco note is very prominent, dominating to a certain extent the essence. The perfume has a strong and explosive character, the chosen name being quite suggestive. The spicy and peppery aroma dries in an elegant, vanilla way. Being a fairly strong perfume, it is not recommended to spray too much on the skin. Broadly speaking, Spicebomb Extreme brings some improvements to the original SpiceBomb essence through the way it accentuates the tobacco intensity and through stronger persistence and longevity than in the original version.

The design of the perfume has evolved over time. The bottle is today in a living and fresh form that suggests life and intense experience. Abstract and modern, Vetiver is one of the emblematic examples of the Guerlain house that possesses a timeless elegance and gracefully defines the deep and strong masculine spirit. Guerlain perfumes are known worldwide for their original compositions and precious ingredients. This legendary brand has never made an exception in terms of the quality of the products promoted. The rare and luxurious materials are found in the structure of the perfumes of the Guerlain house, which are so loved by both the female and the male public. With Vetiver, Jean-Paul Guerlain has managed to implement a simple idea and create a blend that bears the signature of quality and refinement. The creator emphasized every aspect of the natural raw material of vetiver oil and created a contemporary masculine essence that is a tribute to masculinity. Vetiver is a woody-aromatic fragrance in which woody chords, spices and tobacco intertwine in a rare and sophisticated blend. The aroma accentuates the facets of the Vetiver to the point of total abstraction. The effect is airy and shiny. The delicate transaction between the chords of the composition gives the perfume a characteristic delicacy and an almost overwhelming charm. The citrus prelude, the main accent of the Vetiver and the smoothness drying of the wood make this Vetiver spectacular and attractive.

With endless creativity, he changed the image of the Gucci brand. Within this company he worked as Creative Director since 1994, creating a collection that exudes desire and sensuality, addressing women from any corner of the world. In 2000, he launched his perfume line, which fully understands women, giving them exactly what they really want: “His creations give women self-confidence and sensuality,” says actress Mischa Barton in an interview with People magazine. Try Tom Ford’s creations, a real emblem in the fashion world. Tom Ford’s Oud Wood is a unisex Oriental Wood fragrance. Oud Wood was launched in 2007. The nose behind this fragrance is Richard Herpin. The fragrance features Agar Wood (Oud), Brazilian rosewood, cardamom, Sichuan pepper, sandalwood, Vetiver, Tonka bean, vanilla and amber. Although its price is high, the Oud Wood elixir stands out through the dance it sketches between the sweet, oriental and the earthy, woody chords. Vanilla combines with the raw pigment of Vetiver, while sandalwood contrasts with the amber core. Without being particularly sweet, Oud Wood can be classified as a woody-spicy fragrance that has the ability to inspire anyone in the oriental landscape, because it is strong, affordable, delicious and exclusive.

A new seductive fragrance from Armani, Code is an aromatic lemon and parchment cocktail clarified with discreet notes of orange, guaiac wood and tonka beans. Armani Code was created in 2004 by perfumers Antoine Lie, Antoine Maisondieu and Clement Gavarry. The face of the campaign is actor Chris Pine, whose elegance and charm reflect the personality of this perfume, winner of the 2006 FIFI Award Fragrance of the Year Men’s Luxe 2006. The color of the bottle is inspired by the tuxedo worn by actor Denzel Washington at the Oscar. It starts with a cocktail of lemon and bergamot, followed shortly by the delicate aroma of olive blossoms. In the end, the earthy tones of guaiac wood and the sweet essence of tonka beans form a warm and seductive base.

The One by Dolce & Gabbana Eau De Toilette

As thought by the designers of the fashion house Dolce & Gabbana, The One For Her perfume is an aroma intended exclusively for exceptional women, who instantly attract the attention of those around them, not only through physical appearance, but also through sophisticated manners and posture. which it displays in society. Her inner world is dreamy, romantic, but intangible to outsiders, precisely because her standards are impossible to reach. In the same note with the rest of the aromas promoted by D&G, The One manages to be a perfume with personality, its strong character being intense and seductive. Its composition has triple origins, being inspired by the floral, fruity and oriental area. The mixture is warm and sensual, being sprinkled at every step with deep traces of powdered vanilla. The golden design of the bottle is in agreement with the evolution of the composition, the wooden chords being the ones that support the harsh shade of the composition. An overwhelming, gourmet aroma that does not illustrate the predefined canons of floral-fruity fragrances. The indisputable image of a summer night on the shores of a Greek island is a romantic setting, and the aromatic veil of The One perfume does nothing but masterfully complete a utopian myth. The white lily powder and peach jam harmonize in an olfactory combination that will become emblematic for the Dolce & Gabbana brand.